Communication to students who need to claim their Google accounts

Students who have not yet claimed their bConnected Google accounts have received a communication from the bConnected team. If that's you, take a minute to claim your account! 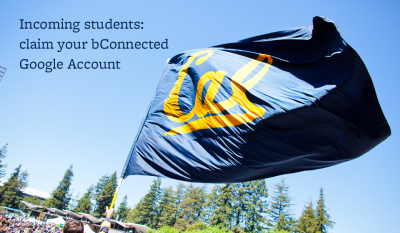 Need help migrating your mailing lists? Have a question about configuring your settings in Google Groups?

If you're not able to attend but have questions about migrating your lists, send your inquiry to bconnected@berkeley.edu.

Google is launching their new version of Google+ for all users on August 30, 2016. This change does not require any user action.

A few improvements include:

Starting this week, Google will introduce two new security warnings in Gmail to help you keep your email safer.

Add images to questions and answers in Google Forms

Google Forms makes it easy to create, distribute, and analyze surveys. Starting today, you can craft even more effective forms by inserting images into survey questions or adding images as multiple choice or checkbox options in Forms on the web.

For example, a graphic designer might ask a business owner to to pick one of three different logos, pictures of which would be offered as multiple choice answers.

It's easy to migrate your mailing lists from CalMail to bConnected Lists!

The bConnected team is currently seeking owners for over 700 unowned CalMail mailing lists. We have begun an outreach campaign to list moderators, administrators and/or list subscribers whose lists are actively being used but are missing an owner. Lists without owners are at risk for deletion when we retire the CalMail mailing list service at the end of year.

Campus bMail users, including alumni addresses, are continuing to receive Ransomware messages in their spam folders, which contain virus-laden attachments. If you received a “spoofed” message in your spam folder that appears to be sent from an @berkeley.edu address (even from your own address), but that you do not recognize, do not click on the attachment. Messages appear to contain scanned images, or pictures but are actually viruses.

The problem with Google Calendar should be resolved as of 11:36AM. We apologize for the inconvenience and thank you for your patience and continued support.

Google Calendar unavailable for some users
Google Calendar service has already been restored for some users, and we expect a resolution for all users within the next 1 hours. Please note this time frame is an estimate and may change. Check Google’s App Status Dashboard for updates.

The bConnected team is scheduled to make a few behind-the-scenes updates to how the mail is routed for subdomains that contain accounts only (no lists or redirects) this morning. We have already communicated with the subdomain administrators who are impacted by this change and will provide an update when all is complete.

The latest versions of the Google Docs and Sheets apps for Android and iOS devices include the following new features:

Google has reported they have resolved the issue for new account holders who were experiencing a delay in receiving email.

Incoming students can continue to claim their Google accounts: